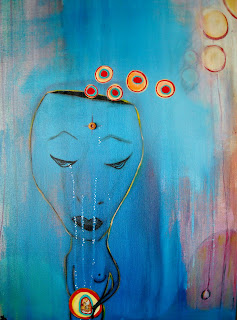 Casting Circles
7-10 p.m.
(Special reception)
VALA GalleryDuring a somewhat long-ago online debate over haiku conventions, a poet whose name I don't immediately recall suggested that what often is called a cliché might more accurately be termed a truism.

With that in mind, let's take up the phrase "art with a heart."

It pops up most often when artists use their gifts and skills to benefit others ... and also when art is obviously deeply felt and personal, rather than purely theoretical.

In both senses, the phrase holds true for Stephanie Gray's Casting Circles, now on display at VALA Gallery in Mission.

Let's take the second meaning first. Gray's work is colorful, intuitive, sweeping and steeped both in the feminine and in sacred imagery. Works such as Underwater Secrets (pictured above) mine the territory where consciousness meets creativity and emotion intersects with intent.

I am passionate about the transformative power of art, Gray writes — and that shows not only in how and what she creates, but also in the way she puts her works to work for those around her.

This, of course, brings us around to the first sense of the truism.

Gray is donating a portion of each sale to the Heart of America Alzheimer's Association, and tonight she'll be giving an artist's talk at VALA about the creative process as part of an event to benefit the organization.

Tonight's reception will also include a presentation by Karen Clond of the HAAA, on the parts of the brain which are spared by the disease, and on the way creative therapy can benefit Alzheimer's patients.

Popular posts from this blog

January 29, 2022
I feel like I’ve just finished a very intense and in depth master class. If the course had a title it would probably be something like, “Adapting To The New Paradigm - Reading Your Energy To Know What’s Working” .  It’s been a totally immersive, 8 week lesson that started with looking at how much money my husband and I have and allowing the number to freak us the fuck out. So much so, that the only alternative we felt we had was to sell our home. The minute we decided this, it felt unbelievably sad and we both experienced a huge amount of grief around the idea of letting this “family member” go.  After we worked through the grief, we set about engaging in a string of contract signing with several companies and individuals who wanted to buy our house. It was excruciating and confusing to watch each deal that we'd make, magically dissolve into big piles of steamy horse excrement. All the while, each step we took was bizarrely out of sync with our normal way of being in the world. O
Post a Comment
Read more

September 27, 2021
Hello and welcome!  I am an intuitive artist, writer and creative transformation guide and have spent almost 3 decades practicing process art . Along the way I gathered creative tools that helped me to remain grounded and centered through some of the toughest transitions of my life. As an added bonus these tools began to connect me to my light and surprisingly - interstellar/interdimensional beings.  I feel strongly that we are in the beginning stages of a planetary evolution of consciousness and that  many of us   are experiencing or will begin to know quite simply, that we are way more powerful than we've been led to believe.   I am here to support this awakening and evolution  by  making art infused with light  as well as using it as a way to  connect with Interdimensional beings . Also by using my process art background and the creative process to  guide others to connect to their own light, truest self  and interdimensional guides. It's also important for me to create  saf
Post a Comment
Read more

February 13, 2022
I've just opened a Redbubble shop! This has been something I resisted for a LONG time. But now it feels like this is just what happens next.  It feels scary and vulnerable and totally right. A few of the designs are what I would consider channeled in that I didn't have much of a hand it what came out and also, they because they are infused with light, which is totally new for me. And there are some images from my altered books that were all about expressing what I was feeling in the moment.  I would love it if you took a few minutes to check it out!
2 comments
Read more